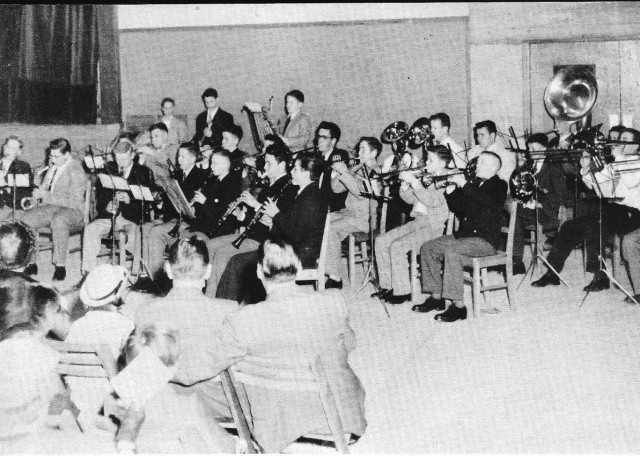 They played in the Kelowna Regatta in 1950. In 1951, they walked away with the Lion’s Club Trophy in the Junior Band competition in Chilliwack. That same year they toured through seven U.S. States and Mexico. In 1952, they were awarded for the third time, the Lion’s Junior Band Trophy and completed their year with a tour through Washington and Oregon.
1953 found the band sporting new uniforms consisting of royal blue trousers, white shirts, red-lined capes and wedge caps. Thus nattily attired they went on to win top honours in the North West Washington State Band Contest, and here at home entered and won the Band contest at the Pacific National Exhibition.
By 1954 Mr. Olson had built his V.C. Band into a proud organization. It had 45 members and contributed a major portion of the entertainment at school functions and performances. It was Mr. Olson’s interest to mold a group of grammar school boys on instruments so that in years to come they might become a championship band. At St. Patrick’s Day festivities the band evoked considerable applause for their renditions of “It’s a Great Day For The Irish,” and “Mother Machree.” Even biggerr things are expected of these budding philharmonic musicians.
Another full year in 1954 added to their list of accomplishments, Honours at the P.N.E. Band Contest, Honours at N.W. Washington State Band Contest and a concert tour through five Canadian provinces and eleven U.S. States.

Every year Mr. Olson held a Festival of Music. In 1955 it was held Friday April 29th in the Lord Byng Auditorium. Master of Ceremony was Barnie Potts. Selections included Military Escort by Bennett, Hans Christian Anderson, Frank Loesser, Syncopated Clock by Hathaway, In The Cathedral by Pierne, Tournament of Trumpets by Bennett, Symphony No.5 by Dvorak, Trombone Troubadours, American Patrol by Glen Miller, Traveler Overture by Buchtel, Drumsticks by Edwards and Stars and Stripes Forever by Sousa.