ABOVE: 1985 promotional shot at BC Place Stadium for the upcoming Rose Bowl Parade in Pasadena.

ABOVE: Another promo shot at BC Place Stadium with Dan Bartolic, Mike Bruce, Tony Miles

I joined the Vancouver Junior band in 1962 and aside from Gordon Olson my teachers were Bill Good & Don Adams. Mr. Olson instilled the strickness it takes to become a musician and was always supportive not to mention his constructive criticism. There were times where I felt like giving up and quitting in the early years but stuck with it thanks to Mr. Olson.

My fond memories are, PNE Parades, Seattle Seafarer Parade, 1966 Pasadena Rose Bowl Parade, Chicago/Detroit 1968 the Detroit Riots very scary, and of course the 1969 Edinburgh Tattoo and travelling throughout Europe. I made many friends and will Cherish them forever. I never gave up drums I continued on playing with several bands including today’s Rhythm & Blues Allstars where we have shared the stage with the likes of James Brown, War and Long John Baldry. Cheers, Rick Hill

A Boy With A Horn! 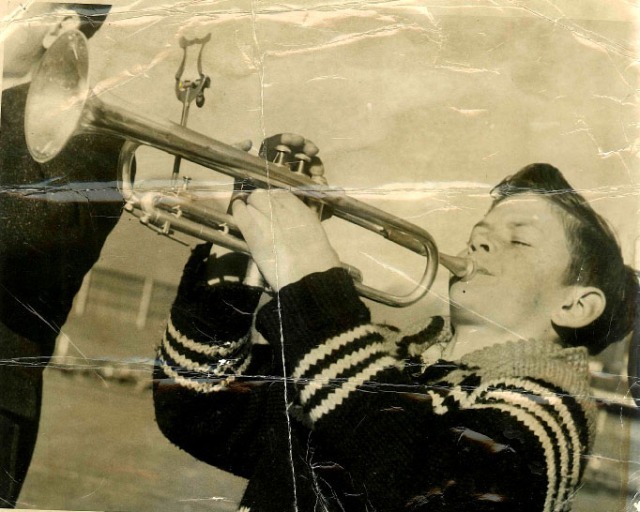 My cousin Charles Milroy was a trumpet player in the Vancouver Junior Band. I really admired him. I spent a lot of time at his house. When I was 6 he gave me a mouthpiece. I had it for about two years before my mother bought me a trumpet. The VJB had a A band, a B band and a C band. I joined in 1957. I really enjoyed it. I went to Britannia High School. We didn’t have a band at our high school in those days. I couldn’t play any sports because the band took up most of my time. It was a fabulous experience. My cousin Chuck was about 4 or 5 years older than me. He was a big influence on me in my youth. Other trumpet players in the band that I looked up to were Tom Rintoul, Sandy Barstow and Gary Thomas.

Mr. Olson was very dictatorial.I remember him standing up in front of the band conducting. I went to the band centre down on Broadway at Main. Ken Hopkins from the VSO was my trumpet teacher. Once a week I got a lesson. The band rehearsed in the Arcadian Hall on Main Street on the hill just north of Broadway. It eventually burnt down. I grew up at 4th & Commercial. I remember riding my bike over to rehearsals on Main Street. I remember carrying my trumpet. I must have had it strapped on somehow. I guess I must have practiced a lot. None of us liked fundraising. We had to walk door to door in our uniforms through the Shaughnessy neighbourhood selling chocolates. Here I was, a kid from the east end. We did a lot of marching.

My first trip was in 1960, the Western US Tour. I remember playing in Pacific Grove, California. I was only 12 on that trip. I met my first girl friend in Pacific Grove. We won a lot of awards. The band performed a lot of intricate march routines. We went to L.A. and Disneyland on that trip. In 1962, we went to Minneapolis. I was 14. We always had chaperones around so we didn’t get into any trouble. We practiced our marching routines at the Model School at 12th Cambie Street. Today there is a shopping centre where it used to be. 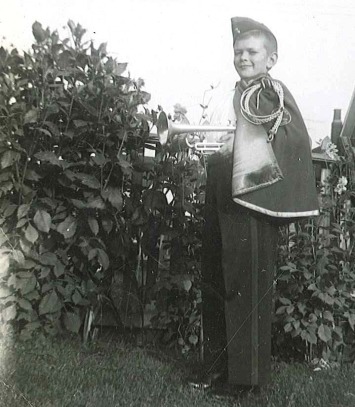 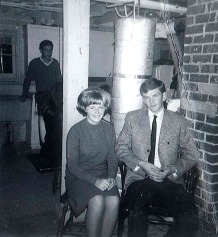 Besides his Vancouver Junior Band in 1948 Mr. Olson began teaching band at Vancouver College a private school in Vancouver, B.C. The year before there had been a big fire and all the instruments belonging to the band were destroyed. When Mr. Olson arrived he discovered he had a band all with bright shiny new instruments.

1947 was the band’s first tour. Forty members traveled in one bus to California.

In 1955, Richards hired his first football band. Union terminology calls it a “house” band, so this was the start of “the house that Richards built.” Some of the instrumentalists were Don Cromie and Jack Hamilton, pioneer trombonists, Roy Johnston trumpet, the “oompah” beat came from Stuart Ross, George Smith was on clarinet and Doug Luff and Floyd Simpson were charter members of the drum section. In all, there were 40 pieces. They made noise before the game started, saluting the Lions’ latest heroes with their college songs. Richards introduced in 1955 his famous fanfare to herald scoring of a Lion’s touchdown (In 1954, there was no incentive; the Lions scored only once all season).