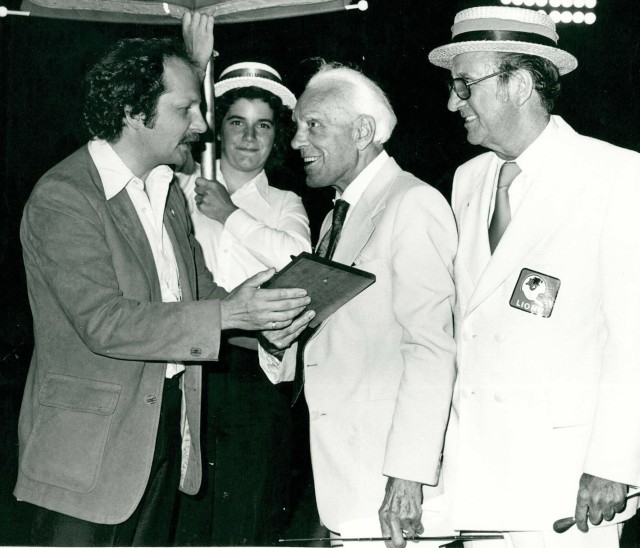 ABOVE: Dal at Empire Stadium

Over 20,000 people laughed the first time Dal Richards played that song in 1954. They laughed because the Lions were funny in their own futility, a football team which had been freshly moulded out of everyone else’s hand-me-downs and have-nots. That is why Richards, a musician, and football, a sport began their long romance. Don Mckenzie, Stan James, Bill Morgan, and Ken Stauffer were directors of the newest team in the Western Interprovincial Football Union. With Tiny Rader, Jack LaBelle, Art Mercer and others, they had provided the impetus to get the league’s fifth franchise.

In 1954, they had it, but must have wondered what to do with it. When coach Annis Stukus put his first team on the field, McKenzie, James, Morgan and Stauffer were struck with a unanimous, and instantaneous, comment: “Omigawd!” They agreed the novelty of professional football was fine and dandy, but it might be wise to give the public a little entertainment, too. Enter Dal Richards- band leader, song arranger, producer and idea man. A sort of Cecil B. DeMille draped in pigskin. Unprepared and inexperienced with halftime entertainment in 1954, Richards brought in high school bands from Mt. Baker, Bellingham and Seattle. And while teenagers kicked up bare legs and clapped cymbals, crowds of football fans reached back into their old gee-whiz, and became paid-up fanatics. Paid up, apparently, for life.

As the team on the field slowly began to mature, so did the half-time entertainment. In the beginning, high school bands sufficed, along with a smattering of model airplane displays, retriever trials and whippet races. Variety, the show business magazine, would have killed itself laughing, and Richards would be inclined to agree. In the realm of showmanship, these shows lacked polish, effort and imagination. Still, the budget amounted to only $4,000 a season.

Another full year in 1954 added to their list of accomplishments, Honors at the PNE band Contest, Honors at NW Washington State band Contest and a concert tour through five Canadian provinces and eleven U..S states.