Above: Delighting visitors to the Community Park area July 1, was the 110 piece Captain Cook band. The band played a number of selections for an attentive audience.

The Beefeater Band was appointed the official band for the Captain Cook Bi-Centennial. It included the joining together of 40 top young musicians from across B.C. with the Beefeater band bringing the total number in the band up to 110. It would be an honour band and it was known as the All British Columbia Bi-Centennial Beefeater band.

During May 11-16, the World International Band Championships were held in Vancouver and the Bi-Centennial Band was the host band for the event.
A tour of the interior of B.C. was planned for the first two weeks in July, highlighting many celebrations and events to be held in conjunction with the Captain Cook Bi-Centennial. 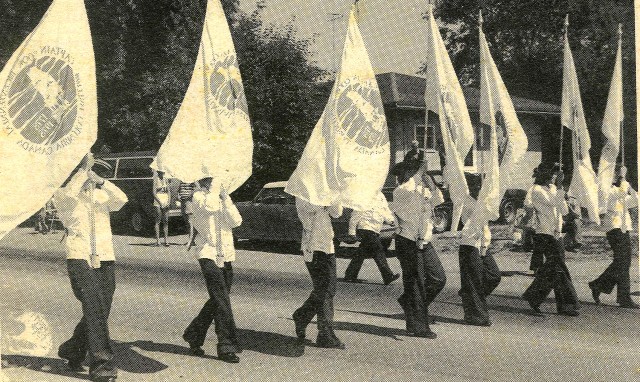 This summer the British Columbia Bi-Centennial band is travelling over 3,600 km and bringing music to 14 different communities throughout the province. grand Forks is fifth stop o a tour that is taking the 110 member band from Vancouver Island to the Kootneys. The band should arrive in Grand Forks shortly after noon today (Wednesday July 5) and will play a selection of marching music as it makes its way through the center of town. Later this evening an outdoor concert will be held at City park. the Bi-Centennial Band has been together for just over a year and in that time has toured Great Britain playing in Cardiff and London. Members of the Beefeater Band from Vancouver as well as musicians from throughout the province have come together for this tour. The day of music is the result of collaboration between the Grand Forks and district Board of Trade and Stan Kirkpatrick of the Ministry of Tourism. The music of the band is an excuse to celebrate says Wilf Warner, president of the board of trade – and its free for anyone who wants to listen.

ABOVE: Does anyone know who this young lady is?.

On September 17, 1978 the Pope paid a visit to Vancouver. The British Columbia Beefeater Band was invited to perform.